Book Review: “The Return of Depression Economics” by Paul Krugman 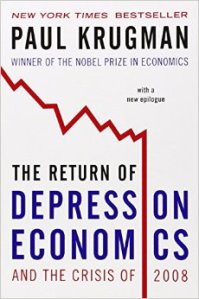 All I can say is that this book put the “ugh” in Krugman for me.   I’ve read a few of his editorials before and so I was interested in his take on the “Crisis of 2008”.    I’m not sure I’ve been more disappointed in a book, except for maybe Hillary Clinton’s “It Takes a Village”.

Mr. Krugman originally penned this work in 1999 in response to Asia’s economic crisis, he then republished it in 2009 after the Great Recession as a means to try to explain that, darn it, Depression Economics keeps occurring and maybe, perhaps, we should consider thinking about the need to enforce more regulations to reign in the unhealthy cycle.

The singular problem I have with Krugman and this work is his refusal to present the idea that Depression Economics as a business cycle is artificially created in our current age and always to the advantage of the creators.  Instead he only investigates the surface of the issues and entirely leaves out key players and events.

His discussion of Depression Economics in Latin America provides an acute example.   He casually mentions ‘weak elected governments’ and ‘alternating military regimes’ as problems for the region.   But he fails to discuss the role of the United States, which very often participated in military coups so that Washington sycophants sat in office, allowing for a major shift of wealth from that nation to the hands of only a few Americans.   He fails to mention that anyone opposed to American intervention was ridiculed, imprisoned, tortured and/or murdered.   He fails to mention the outright, licking-my-lips greed bred into Chicago School of Economics graduates that molested entire foreign economies beyond repair.

Krugman speaks about the role of the International Monetary Fund and its willingness to bail out foreign countries who suddenly found themselves unable to pay back their debts.   He refuses to mention that the debt was created solely and entirely as a result of what’s known as the Volcker shock, or the raising of interest rates, which automatically strangled poorer nations who owed us money.

Most maddening is Krugman’s cavalier attitude and approach toward the Crisis of 2008. He deals with it anemically in just two short chapters at the end of the book and almost dismisses the entire event with a meaningless Alan-Greenspan-should-have-done-a-bit more-to-prevent-the-crisis admonition.   In fact, Greenspan consciously turned a blind eye to the rape and pillage of America’s homeowners.

Depression Economics is a cycle, as Krugman’s work manages to demonstrate (It’s also one of the major symptoms of the Financialization Revolution).   However, for some reason he chose to leave out crucial elements that create Depression Economics, which, if dealt with, would keep us out of the cycle entirely.

The book does give some insight into the Asian currency trade and the brilliant manipulation of the market by a few in order to make a lot.  However, it’s failure to bring in other contingencies seriously related to Depression Economics leaves it wanting.

Frankie earned her BA in History from CSU Chico. Her writing includes current events as well as self published fiction and a children's book she is publishing. She lives in northern California with one husband, two dogs, and three boys. Frankie is an avid cooker, reader, hiker, and napper.
View all posts by Frankie Wallace →
This entry was posted in Uncategorized. Bookmark the permalink.