Book Review – ‘The Shock Doctrine: The Rise of Disaster Capitalism’ 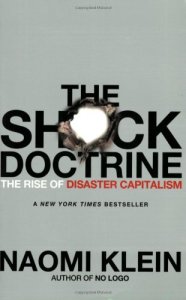 If ever I could force, bribe, blackmail, sweet talk, cajole, or otherwise entice you to read a book that describes our modern economic age, this would be the one. But I would issue a strong warning:  You’ll be sick over its contents.

Klein sets up the entire premise by giving us a thorough  history lesson about something called a ‘blank slate’.   Early psychologists messed with the idea that shocking a person by placing them in isolated rooms free from all stimulation would ‘break’ them and create a ‘blank slate’  on their psyche, one that was ready for reprogramming at the mercy of their doctor.  The idea was that such a complete shock in such a  drastic manner would render a person unable to fight any new ideas or programming, they were putty in the hands of their superiors, they were impotent in the face of any change, they could only accept their new conditions.

Disturbingly, Klein uses this psychological history to make a connection for us concerning current economic issues:  We live in a world whereby our leaders take advantage of any ‘shock inducing’ situation and revamp policy without the slightest whimper from us.   She coins the term “Disaster Capitalism” as a way to describe this new way of doing business.   She then meticulously demonstrates the success of Disaster Capitalism by discussing what seems to be endless examples of Shock Doctrine polices instigated against whole nations, including our own United States.

For example, almost the entire South American continent became subject to Shock Doctrine policies at the hands of Milton Friedman and the Chicago School of Economics. And it was blatantly, tediously, planned.

And that, kids, is just one nation.

If you’re not sick yet or at least nauseous, the rest of South America, the ‘Southern Cone’ as Klein terms it, is full of similar stories: Premeditated coups, followed by complete economic change, and murder or at least torture and prison for those who fought against the pillage.

Greed has no boundaries.  Klein explains that Shock Doctrine and Disaster Capitalism aren’t just limited to third world countries who might be naive to the Milton Friedman’s of the world.   Russia, the UK, the Middle East, and even our own nation would be victims.

At a time when local people desperately needed well paying jobs to rebuild their lives, our very own government sold them out to a group of contractors who paid them very little.   By the time subcontractors took their cut there wasn’t much leftover to pay the workers.  Entire housing areas, once occupied by African- American citizens, were confiscated and rebuilt for more affluent ‘white folk.’  School systems were gutted and privatized.  Klein writes, “New Orleans’ public sphere was not being rebuilt, it was being erased, with the storm used as the excuse.” (524)

Our government could get away with the whole gig simply because the area was in shock, it’s citizens were powerless to protest in the after effects of the hurricane.  The rest of the nation watched in their own shock and amazement as the whole thing went down, thanking gods and stars and fate that it wasn’t them in New Orleans that last week in August in 2005.

Storms the size of Hurricane Katrina, war, or government supported military coups are Disasters that create an entirely new opportunity for United States businesses to make obscene amounts of money.  Klein has a sharp eye, she draws a distinction between then and now (I would say ‘before the Financialization Revolution’ and ‘after the Financialization Revolution’):   “Not so long ago disasters were periods of social leveling, rare moments when atomized communities put divisions aside and pulled together.  Increasingly, however, disasters are the opposite: they provide windows into a cruel and ruthlessly divided future in which money and race buy survival.” (521)

This is ‘Shock Doctrine’ in a nutshell, are you sick yet?

We must be aware of what is going on. We must understand this new way of doing business.  If we do not, we may find ourselves and our families ripe for the next pickings.   Read this book.   Let the righteous anger it creates be your motivation to effect change so that you are not a victim.   Change is possible, but only if we are informed enough to make it – and only if we allow ourselves to be uncomfortable with the truth of the problem, no matter how sickening the information.